Bohart Museum director Lynn Kimsey, a UC Davis distinguished professor of entomology, said the calendar--featuring students' unusual comments on their Entomology 100 term papers and illustrated by Bohart associate Kris Merritt--is now on sale for $12 in-house or $15 through the online gift shop. (Due to COVID-19 precautions, the Bohart Museum is currently closed to the public.) Funds will benefit the Bohart.

Kimsey teaches ENT100 and annually collects what she calls the "prized sentences."

The sentences selected for the calendar include: Entomologist/artist Kris Merritt at the top of Carpenter Ridge during the 2016 UC Davis Bug Boot Camp.
"One of the outcomes of teaching a general entomology course to undergraduates is that you develop a new appreciation for science fiction-fantasy," Kimsey said recently. "In part, this is because every year some new scientific discovery about an insect causes you to have a head slapping moment—they do what? The other part is how little students know about insects. Most are not entomology majors, and many aren't even majors in the biological sciences, so there are a lot of misconceptions.”

“One aspect of teaching this course is the writing requirement,"  explained Kimsey, a UC Davis faculty since 1989. "Students at UC Davis are required to take a number of units in general education, science and writing. My course fulfills two of those requirements, which means that I have to require—and grade—student term papers as part of their assignments. I can say definitely that student writing abilities have not improved over the years. So, to alleviate the pain of grading these works of art, I started collecting particularly silly or otherwise awesome sentences from their papers.”

Merritt, who holds a bachelor's degree in entomology from UC Davis, does freelance illustrations and enclosure designs. A resident of Sacramento, she is an entomologist, artist and beekeeper. (See her work on her Instagram account at @bombus_polaris)

"My earliest memory of putting pen to surface is of some amorphous blob meant to be a pirate ship drawn on the side of those old giant inflated balls with handles you'd bounce around on,"  Merritt said. "Ever since, there has been no surface or media safe from my touch. I pretty much got into anime and manga (Japanese animation and comics) beginning in the fifth grade, and then on through high school.

"That gave me a decent understanding of anatomy and portraying motion," she said, adding "I later expanded my subjects to the extremes of realism and cartoons/caricatures, eventually developing my own unique style."

"I started working at the Bohart Museum in 2016 while an entomology undergraduate and was soon recruited as the in-house artist. I was tasked to illustrate Lynn Kimsey's collection of sentences, as well as various outreach projects. My favorite mediums to work with include alcohol markers, ink, and colored pencils, though I also appreciate the various advantages of digital art programs."

The Bohart Museum is located in Room 1124 of the Academic Surge building on Crocker Lane. Home of a global collection of eight million insect specimens, it is the seventh largest university insect museum in North America. It also houses a live "petting zoo," comprised of Madagascar hissing cockroaches, stick insects tarantulas. The online gift shop includes such insect-themed gifts as hoodies, t-shirts, books, posters and jewelry, as well as insect-collecting equipment. For more information, contact bmuseum@ucdavis.edu. 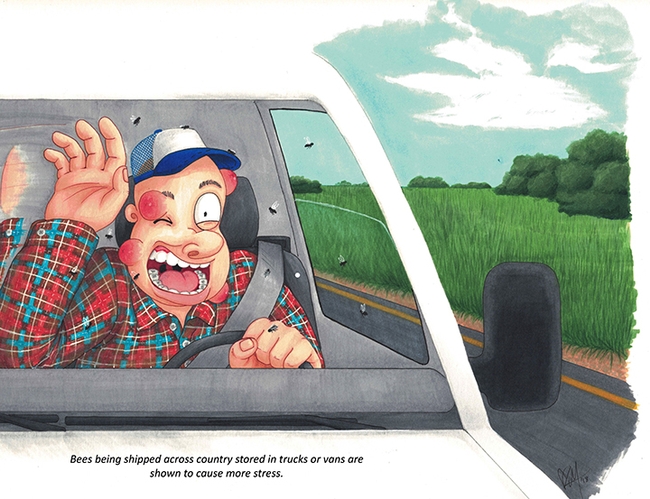 "Bees being shipped across country stored in trucks or vans are shown to cause more stress," wrote one student on an Entomology 100 term paper that appears on the Bohart Museum of Entomology's 2022 calendar. (Illustration by Kris Merritt) 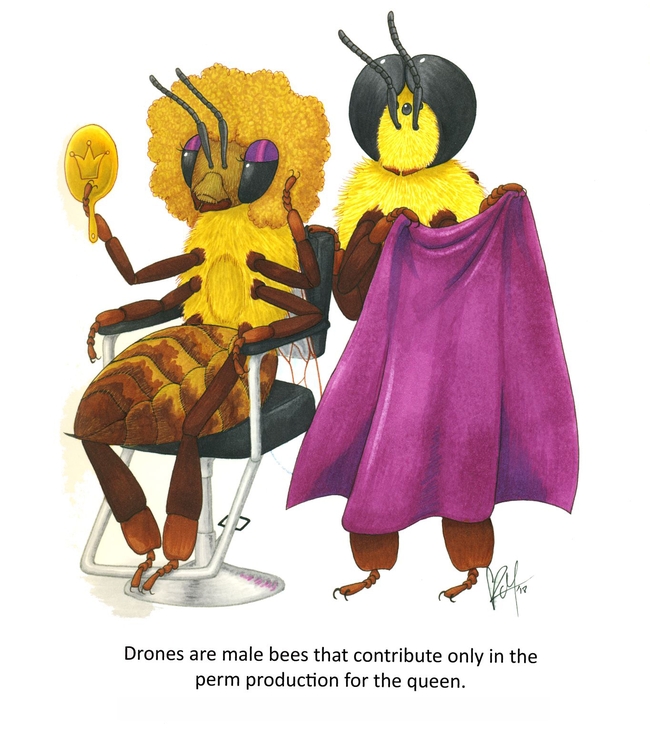 "Drones are male bees that contribute only in the perm production for the queen," wrote a student in Lynn Kimsey's class. Kris Merritt illustrated it on the 2022 Bohart Museum calendar.